Ecumenical prayer meeting in Kiev – role of a Daughter of Charity 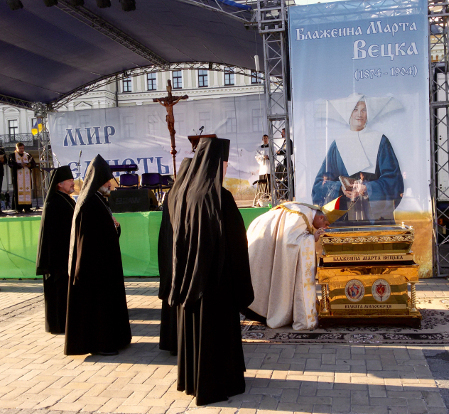 Archbishop Petro Malchuk called Blessed Marta Wiecka, DC the Apostle of Unity, whom the faithful of different denominations had addressed in their prayers at the ecumenical prayer meeting in Kiev. He added “Let us be up not in arms, but rather in prayer!”

An ecumenical prayer meeting took place at Mykhailivska Square in Kyiv at 15:00 on October 10, 2015, to which the relics of Blessed Marta Wiecka were brought. Clergy and the faithful of various denominations joined in a prayer to the Lord for PEACE to reign in the country, for UNITY and for our hearts to be full of MERCY.

The prayer began with a solemn procession that walked from St. Michael’s Golden-Domed Monastery, in which the clergy of various denominations took part along with seminarians solemnly carrying the relics of Blessed Marta Wiecka.

Then Archbishop, Ordinary of the Kyiv-Zhymomyr Diocese, Petro Malchuk delivered a solemn welcoming speech. The Archbishop gave an extremely warm greeting to the representatives of other Churches and confessions who had agreed to attend the joint prayer for peace. Thereafter, Vespers was said. All attendees listened to a reading from John’s Gospel. After that, the floor was given to the representatives of all the Churches that were there.

Archbishop Petro Malchuk began his speech by talking of peace and pointed out that a human heart was the place where it emerged. His Excellency stressed that Sr. Marta had that kind of peace in her heart and called her the Sister, Apostle of Unity, whom the faithful of different denominations had addressed in their prayers. The Archbishop underlined the acting power of prayer by drawing the example of Mahatma Gandhi and the efficient Rosary prayer in Austria that once had helped establish peace. Thus, “let us be up not in arms, but rather in prayer!” His Excellency said.

After the speech by His Excellency Petro, the prayer meeting was supplemented by amazing, perfectly picked up and prepared singing of the choir from St. Alexander’s Cathedral.

Having prayed together, bishops spoke from the stage about peace and unity in Ukraine. His Eminent Beatitude Liubomyr drew attention of the faithful to peace, unity and mercy. According to His Beatitude, when we understand these three notions, we shall receive answers to numerous questions that we are presently worried about. His Eminent Beatitude Liubomyr said that nothing could ever develop or sprout without peace. Speaking of unity, His Beatitude pointed out: “No one is like an isle to oneself detached from everybody. On the contrary, we are more ourselves when together with others.” In addition, mercy, according to the moral leader of the Ukrainians, is the best way to open up before others and serve one another.

In his speech, His Beatitude Liubomyr pointed out: “We have gathered here for a joint prayer to be close to God. Neither peace, nor real unity, and let alone mercy can be achieved without God… He is the one to bestow these gifts on us. We are abundantly gifted by God. However, unfortunately, we tend to often forget that we cannot enjoy these gifts without Him.”

His Beatitude also drew capital city citizens’ and visitors’ attention to the figure of Blessed Marta who was a good example of the right way to use God’s gifts.

“Today, while being here in a joint prayer, we should feel God’s strength very deeply which wishes to enter us so that peace, unity and mercy would set in through us… Today we must ask ourselves the question: “What can I do for this to happen?” It is an extremely important step that God expects us to take!” His Beatitude Liubomyr concluded.

Thereafter, seminarians of the Kyiv Seminary of the Greek Catholic Church performed prayerful pieces calling everybody for the joint glorification of God.

In his comment for the Kyiv Archeparchy Media Office His Excellency Yosyf (Milian), Kyiv Auxiliary Bishop, said: “Speaking of peace, the first and foremost thing is to make peace in one’s own heart. To make peace means above all to make it in your own family and in relations with your friends and loved ones. Then global peace will arrive! I believe that peace in the world depends on person’s making peace with his or her Creator – God. Only based on this foundation can we build peace in Ukraine and peace in the whole world,” His Excellency said.

At the end of the event, all those willing could honor and venerate the relics of Blessed Marta Wiecka as well as ask God for necessary graces through her intercession.

It bears reminding that the relicts of the Blessed have recently arrived from the ATO area and will be making pilgrimage in churches all over Ukraine, where believers from different localities will be able to pray for peace and unity in Ukraine under her intercession. 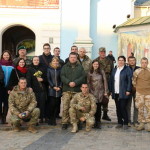